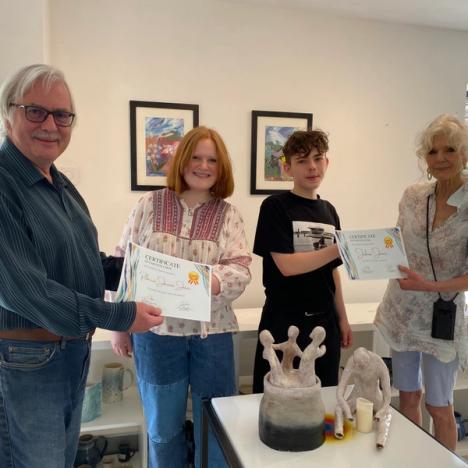 Published on Tuesday, 17th May

In front their winning pieces. 'Dancers' by Rebecca Jarman Jones and a 'Broken Man' by Josh Jones.

Rebecca and Josh both attended 'Sculpteen 21' last summer, when the project was to produce a piece of work that would reflect the spirit, energy and legacy of Robert Owen. The challenge was to consider not only aesthetics and the environment but the practicalities of placing sculpture in public spaces, the choice of suitable materials, how the work might weather, the effects of wind, rain and sun and the safety of the public.

Some excellent work was produced, 18 young people attended and the 8 shortlisted pieces were exhibited at Mid Wales Arts Centre, Caersws. Newtown Library, The Robert Owen Museum and Oriel Davies Gallery. The public were invited to vote for the piece they thought best embodied his legacy. It provoked a lot of interest and over 1500 votes were cast.

The two clear winners were Rebecca and Josh with 422 votes apiece. The runner up was Liam Reast.

Attendees came from all over Powys, MWA were delighted when they realised that the joint winners both happen to live in Caersws. Organiser Cathy said that this shows the positive values of having such a thriving art centre giving access to the arts in a rural community.

Josh is off to Falmouth University to study Film in September and Rebecca plans to start her Foundation course in Art in September at Shrewsbury College. They are both attended Llanidloes High School. They now have some funds to buy art materials and the knowledge that their work won the approval of the public.

Published on Tuesday, 17th May